Coffee Talk: It’s the Most Busy-full Time of the Year

Image by Melk Hagelslag from Pixabay

Hello there, Bloglandia. It’s been a little while. I just wanted to pop in and touch base and let everyone know I’m still plugging along. There’s not a lot to report. Freelance writing has been keeping me busy, and when I get breaks between articles I’ve been trying to keep up with behind-the-scenes book marketing tasks and housework, and also rest my tired brain. We both haven’t been sleeping so great, and winter is already zapping our energy, so we’re struggling a little to keep up with everything and oh so ready for the Christmas break.

But for all of that, I’ve still been diligent to get up early every weekday morning and work a little bit on my romance novel, which is about two-thirds of the way done. I may end up having to pare it down when all is said and done. I think it’s going to end up quite a bit longer than the typical fluffy romance read. But it’s turning out to not be all that fluffy. I keep tackling some heavy stuff. Stuff like narcissistic abuse, church hurt, C-PTSD, being upset with God… so much for writing a romantic comedy. At any rate, it’s coming along.

We did manage to put out some Christmas decorations, although we had to Dixie proof everything, and we didn’t even attempt to put up the pretty fake tree we bought last year. Instead we harvested a little juniper from our property and decorated it with our unbreakable ornaments. 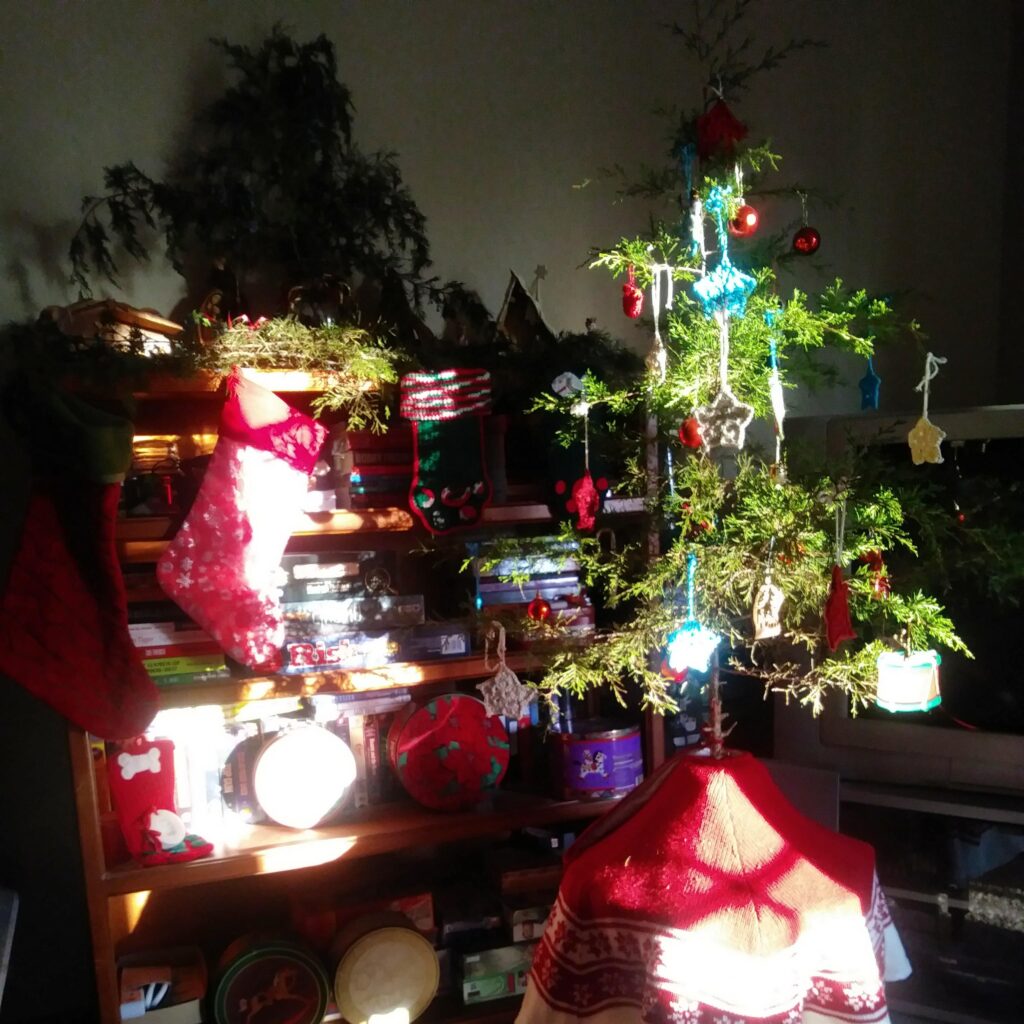 Also, I’ve taken up playing the recorder. I’ve tried and tried over the years to make myself into a guitar player, but the truth is that I’m a woodwinds gal. In my heart of hearts, I want to replace my long-lost saxophone, but those are too expensive. I’ve been drawn to playing the Irish tin whistle as a cheap substitute. But I’ve got this recorder that Matt bought me years ago, so I pulled that out in the hopes that by playing it he’d be more inclined to let me get a set of tin whistles. I looked into some recorder lessons on YouTube and discovered that there’s a lot more to it than I thought. I don’t have as much time to practice as I’d like, but I’m having fun with it. I still want those tin whistles, though. And a saxophone. Some day…

Today is shaping up to be pretty and mild, so we’re going to make ourselves get outside and do some neglected chores. The chicken coop and pen are sorely in need of a cleaning. The plan is to muck it all out and transport all the poopy stuff to our garden bed area, where we’ll spread it around and cover it and let it go to work conditioning the soil through the winter. And we’ve still got a million leaves to rake, and we still need to gather and cut old deadwood for our second hugelkulture bed. Probably we won’t get all that done today, but if we can get the coop cleaned out I’ll be happy. Also, if I ever start a homesteading blog, I’m going to call it “Dirt, Sweat, and Chicken Poop,” and never will there have been a more aptly named blog.

Speaking of the chickens, ours will be old enough to switch from grower to layer feed soon, and we’ve been researching cost-effective ways to feed chickens. Because let me tell ya, commercial chicken feed is ‘spensive. If any of you reading this have tackled this problem and have any suggestions, I’d love to hear them.

Aaand it’s just about time to head out and get to work. I’m hoping to be back soon with an end-of-year update, and hopes and plans for the new year. Because it’s already getting to be that time. Can you believe it?

Oh, and ICYMI, Desolation, Book One of my now-complete Dominion trilogy, is only 99 cents!

Until next time, Bloggy friends!

Dominion news! New covers, and get Desolation for only 99 cents!

A Gift for You