Image by Tracia from Pixabay

I’ve been trying to write this post, or one like it, for two or three weeks now. Life has been so full and this is the first time in a while that my energy and focus are aligned with me actually having time to sit down and write an update. But even with everything going on, it’s all so mundane and ordinary that it hardly seems worth mentioning. Freelance work is continuing to come in, there’s lots and lots of mowing and weed-eating to be done, always, Dixie is still a lot of work, and I’m still trying to spend a good portion of my free time on focused Bible reading and study, or taking in good Bible teaching.

Last weekend we had our friends / pastor and his wife / landlady out and we all pitched in and got a lot of stuff done around the property, clearing a lot of limbs and cutting down the big pile we had set aside for our eventual hugelkultur garden. That right there was a huge help and a lot more progress in a much shorter amount of time than we could’ve made on our own. It was also nice to have some visitors and a chance to be social. It had been a good long while.

In other news on the homefront, we’re still trying to figure out our chicken situation. Our next-door neighbors got a small flock a month or two ago that they were allowing to free-range, a lot of which they were doing on our property, but then they shut them up after we found an egg in our barn and returned it to them. Now I miss seeing chickens everywhere. Hopefully we’ll get our coop built soon and get some chickens of our own.

Speaking of Dixie, she’ll turn six months old on Tuesday. She’s still a handful, but not as much as she used to be. We haven’t weighed her in a while, but I’m sure she’s over 50 pounds — small for a full-grown German shepherd, but awfully big for a puppy. I still have moments every day where I’m just like, I can’t believe this is our dog now. She’s got all her adult teeth in, which means instead of slicing and dicing our hands up, she now just bruises them with her bone-crushing jaws. Apparently GSDs don’t need to be trained to go for the arms and hands; it’s just a natural-born instinct. At any rate, she’s calmed down some, though she still seems to be dialed up to 11 most of the time, and she’s becoming more affectionate and obedient and growing up into a good dog. She’s still got a long way to go, but she’s already come a long way. There’s a lot about this age that’s fun, and we’re trying to enjoy it, but at the same time we can’t wait until she’s a couple of years old and calms the heck down. 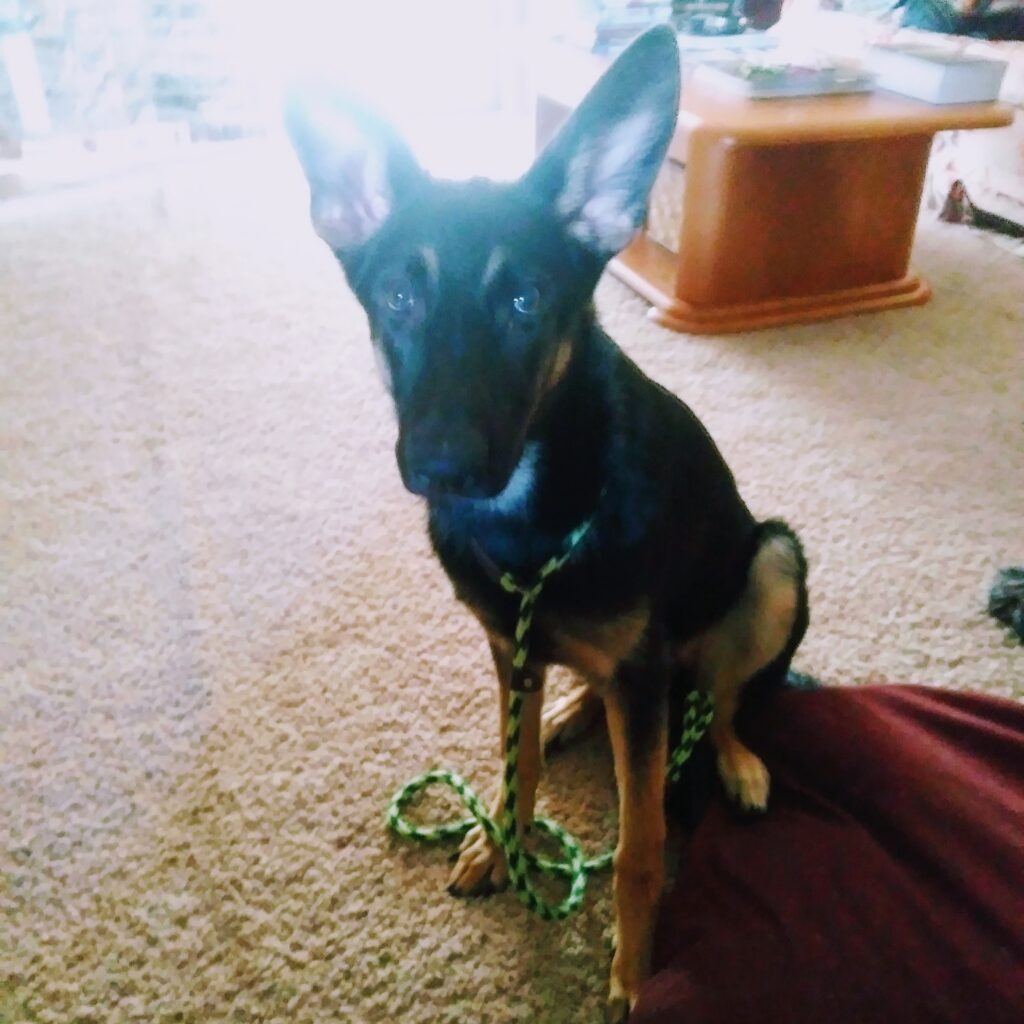 She’s very difficult to photograph. But she sure is purdy.

Apart from all of that, not much has been going on. I’ve talked here before about how I struggle to have any desire to work on my fiction or continue to be an author, and the struggle is real. I’ve started praying about that, and I’m trying to get my head back in that space. This morning I transferred everything I had written on Revolution Part 2 from my AlphaSmart into Scrivener so I can just start editing. That’s my plan for now — to just spend a little bit of time each day editing what I’ve got so far and get my head back into that story. And then I can finally write the last few scenes (seriously, I’m so close to the end it’s ridiculous that any of this is hard for me) without so much editing work hanging over my head and making me feel overwhelmed and avoidy.

As inactive as I’ve been here, I’ve actually been a lot more active on my Instagram, especially in my stories, where I’m more apt to get a bit political and salty with my opinions. I’ve also been preaching a lot in that space. I’m still planning to do a big post here about how I’ve evolved spiritually over the past year or so, and I’m also still kicking around a couple of podcast ideas. It’s all a matter of finding time that coincides with having energy and focus. Really, though, I need to be a better steward of both my time and my energy, and maybe not spend so much time on Instagram, and definitely stop perusing headlines and going down conspiracy theory rabbit holes. Although that’s what one of my podcast ideas is about, so I’m not sure how that will work.

If you follow my Facebook page, you should know that it’s been hacked, and both Mr. B and I were booted from having administrative access. Facebook is no help at all — they literally said there’s nothing they can do. So if you follow me there, you should go ahead and unlike and unfollow that page. I’ll be getting a new page up and running at some point, but in the meantime you can follow my personal profile for updates. I try not to get on Facebook too often, though, so don’t expect me to suddenly become active there. I’m not too upset about it, because most of that page’s followers are people who know me IRL and just wanted to support me, which is appreciated but is actually no help at all when trying to figure out the demographics of my actual readership. So it’s good that I’ve got a reason to start over with a fresh page.

Oh! I’ve also been wanting to tell y’all about our latest escape. We generally try to avoid anything that’s coming out of Hollywood these days, so lately we’ve been watching a lot of anime. I know we’re woefully behind on this and if any of you reading this are anime fans you’re probably way ahead of us, but we’ve fallen completely in love with One Punch Man. At first glance I thought it was basically a Japanese version of The Tick, straight-up superhero satire, but it only took a few episodes to realize there’s a lot more going on. This show has a lot of heart and a lot to say about themes of heroism and character, and it does it all with humor and charm.

My reading lately has all been theological stuff, and I’m hoping to post some reviews at some point. I’m thinking I need to make some space for fiction to help get my head back in that space. I tried to get through an audiobook of Brave New World, but it was too disturbing and hit too close to home. I finally got my login issues with Libby and Overdrive straightened out, so maybe I can find something fun to read.

That’s about it for now, but keep the conversation going! Share your thoughts and tell me what you’re up to, and what you’re reading and/or watching in the comments.

And have a great weekend!

We’re Not Alone: Deuteronomy 32 and a Unified Theory of the Paranormal