If we’re dog people, why do we have all these stinkin’ cats? 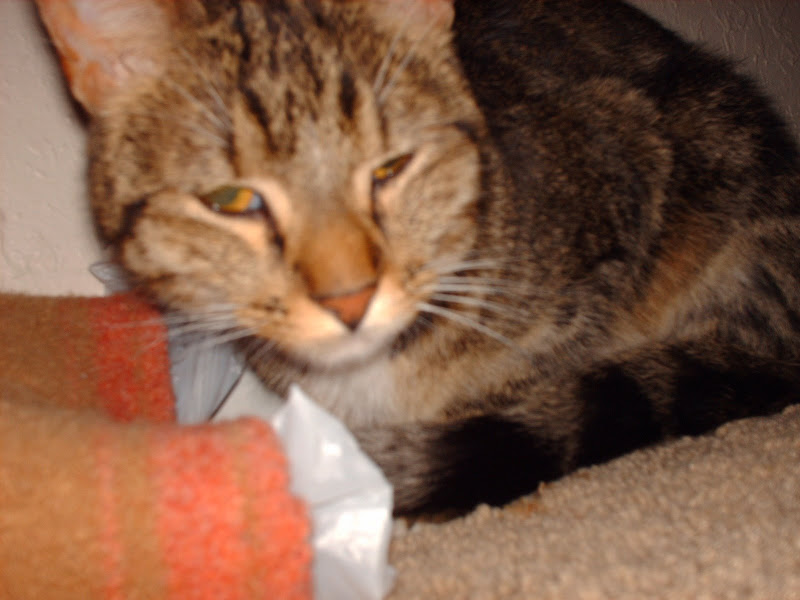 Meet Boudica.  Meet, also, the only successful picture I’ve been able to take of her face, so far. All of my other attempts were thwarted by a swift head-butt to the camera. It’s not the best shot, and fails to adequately show off her bright green eyes and completely lops off her big ears, and she’s not all that distinguishable from Niblet; but at least it’s not a blur, and so it gets to be her first impression on the world.

We began to notice this cat lurking in and around our yard early last week. She must have been casing the joint and sizing us up, and apparently she liked what she saw, because come Sunday night, she met us out front while we were taking out the garbage and proceeded to get her flirt on, big time. We of course, being the total suckers that we are, completely fell for her chirpy little meows and big, big green eyes and exotic markings and her considerable charm. Her prominent hip and rib bones sure didn’t hurt her case, either. It took less than ten minutes for us to go from “Aww, cute kitty, where do you live?” to “Maybe we should take her to a shelter” to “Let’s put some kibble out for her” to trapping her in our garage and making plans to take her to the vet. 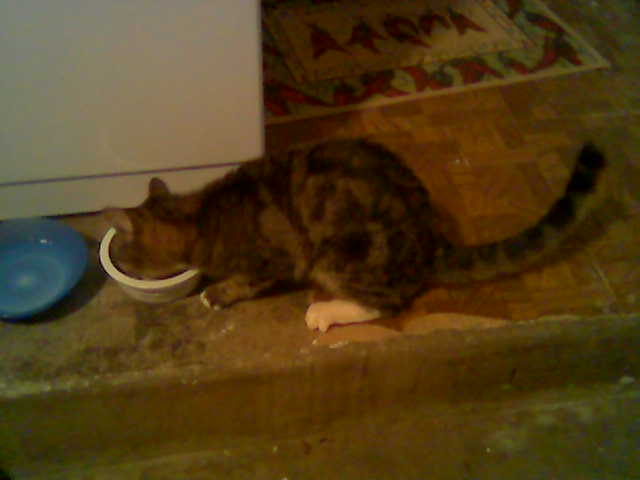 “Nom nom nom nom nom”
And just like that, we have three cats. She spent the first night in the garage, since we wanted to get her checked out and vaccinated before exposing the other pets to her, where she went through two whole bowls of kibble. When she wasn’t eating, she was perched on the washer with her face pressed up against the door that leads from the garage to the kitchen, meowing pitifully and thoroughly freaking out Niblet and Sasha, who, having apparently called a temporary truce from mutual shanking attempts, both sat in the kitchen giving us “WTH?!” looks in unison.

By the next morning, the fog of “Aww cute kitty hungry sad hurry feed her HURRY!” wore off, and we began to have second thoughts about keeping her. But in between rational discussions about the pros and cons and which no-kill shelters could take her soonest, we kept sneaking visits out to the garage, where her excitement at seeing us reached puppy-like proportions. 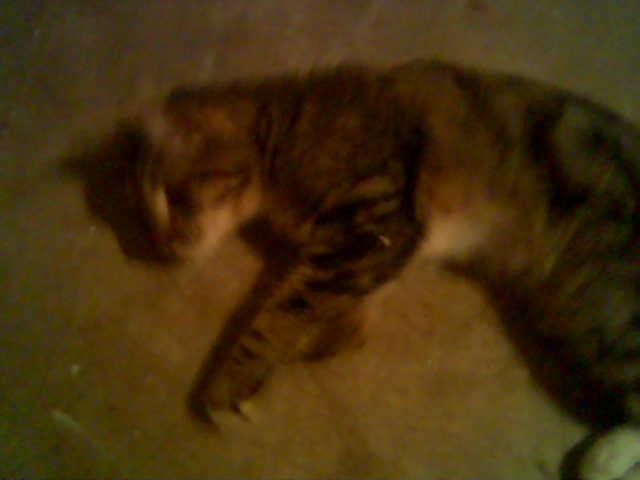 “I can has home nau? U can gives belly skritches.”
Like I said, we’re suckers. And so we sucked it up and took her to the vet, where it was discovered that she was already spayed and declawed (PSA-time: This is one of MANY reasons declawing is a horrible thing to do to your cat. She was stuck outside, wandering around for who knows how long, with no means of climbing to safety or otherwise defending herself if she’d been attacked by a dog or a wild animal; not to mention how it screwed with her ability to hunt and catch her own food. Now I need to take a deep breath and count slowly back from ten. Here endeth the PSA), but was not microchipped, so I got to release the breath I’d been holding fearing we’d have to give her back to somebody.

Now, lest you think I’m being totally selfish, I did come home and check the Craigslist lost and found, realizing that A) judging from her markings and her quirky personality, she’s obviously at least part Bengal and thus probably cost somebody a pretty penny to adopt in the first place, B) whoever that somebody was, poor judgment aside, obviously had a lot of money invested in her, what with the declawing, and C) regardless of how much money was tied up in her, if she was my kitty and she went missing, I would cry and cry and plaster every telephone pole between here and the Blue Dome District with her cute little mug, and posting a lost cat ad on Craigslist would be the least I would do. I didn’t find an ad, and I’m not going to post one, because, refer back to C. Obviously nobody’s looking for her that hard. I know accidents happen and pets sometimes run away through no fault of the owner, but between that and the declawing, I just think we’ll do better by her. Plus, after the vet visit, now we’ve got more money tied up in her than we can really afford, and besides, we’re already attached like Flick’s tongue to the flag pole. 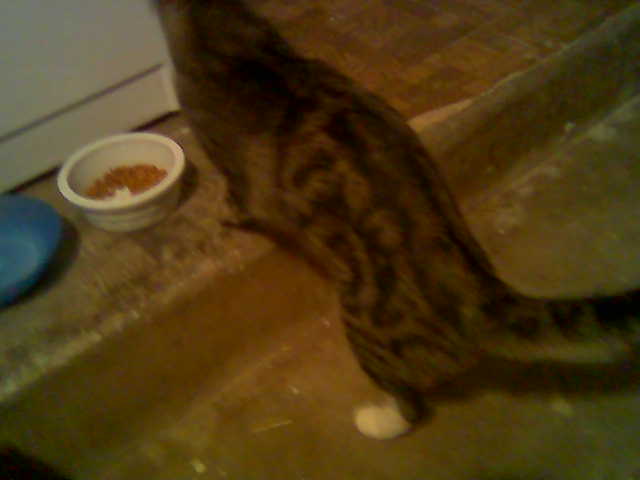 “I’s no Tabby! I has un-yoosh-yul markings!”

At any rate, she was also cleared of Feline AIDS and Leukemia, given all her shots and treated for fleas, and then it was home to introduce her to the rest of the family. That part actually went better than I thought, due in no small part, I think, to her being too tuckered out to pose much of a threat. Sasha and Niblet aren’t happy about it, not in the least, but so far Boudica seems pretty non-confrontational, so there hasn’t been anything scarier than growling and hissing at her from a distance. By now, they’ve all pretty well agreed to ignore and avoid each other. 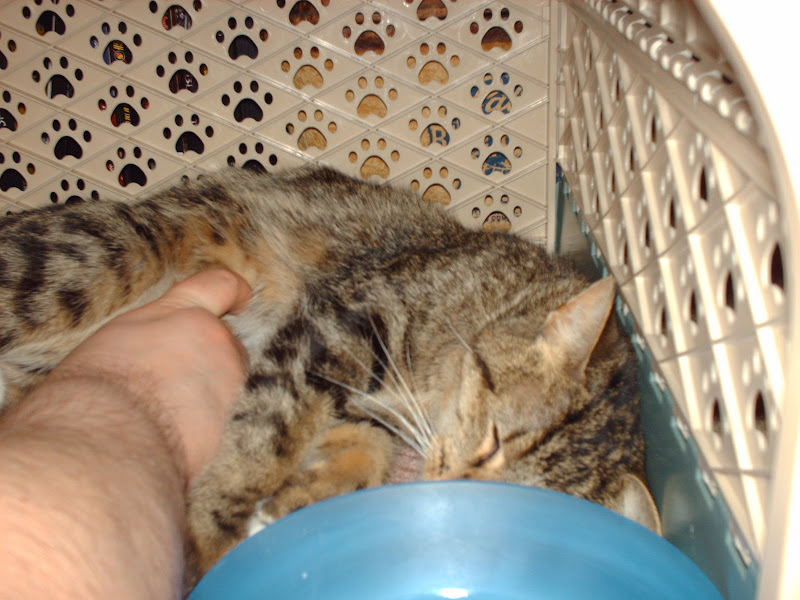 Pete, on the other hand, can’t wait til she gets over her anti-dog bigotry and decides to be his new best friend. Especially since this morning when a stressed out Niblet, his old best friend, shocked and betrayed him by greeting his attempts to play with a sharp claw to the head. His feelings were wildly hurt, but after a morning-long pouting session, he’s ready to shake it off and move on with the new girl.

She’s been an official Bauhaus for almost a full twenty-four hours now, and I think we’re all pretty happy with the situation. She’s really a neat cat. Right now she’s all gangly limbs and ridiculously long tail, but I’m sure she’ll fatten up soon enough. She’s more affectionate than either of our other cats, which is nice. Also, she’s chatty. I think she vocalizes practically every thought that passes through her pretty little noggin. I’m going to have to learn an entire new vocabulary of meows and chirps. As for the name, Boudica, it just popped out while Husband was talking to her Sunday night, and we were both struck by how well it fit that we didn’t even consider any other names.

If she was legitimately lost and not abandoned like we suspect, then I’m sorry to her original owners for their loss, because it would really suck to lose this kitty. And if they see this, maybe it’s not too late to work something out, although Husband won’t be happy about the prospect of giving her back at all. Neither will I, for that matter. She’s fitting nicely into our little family, and I couldn’t have asked to rescue a better kitty.

It can’t be a mere coincidence that cat rhymes with brat.