Coffee Talks are where I chat with you as though we were sitting down together over coffee, updating you on my life, my work, and what’s been on my mind lately. I’d love to hear what’s been going on with you, as well, so keep the conversation going in the comments!

Note: I wrote this post on Friday, but lost connection to my web host right as I was ready to post it. So that’s why you’re getting a rare Saturday post, following a lot of back and forth with tech support to fix the issue.

Happy September! So it’s basically fall now and also already Halloween. Yes, yes, the equinox is still weeks away and temps are still in the high 80s and 90s, but that’s a minor detail. Bring on them pumpkins and candy!

(Also, just so you know, Christmas this year begins on November 1st, so you should probably prepare.)

And now for our big news: THE CHICKS ARE HERE YOU GUYS!!! 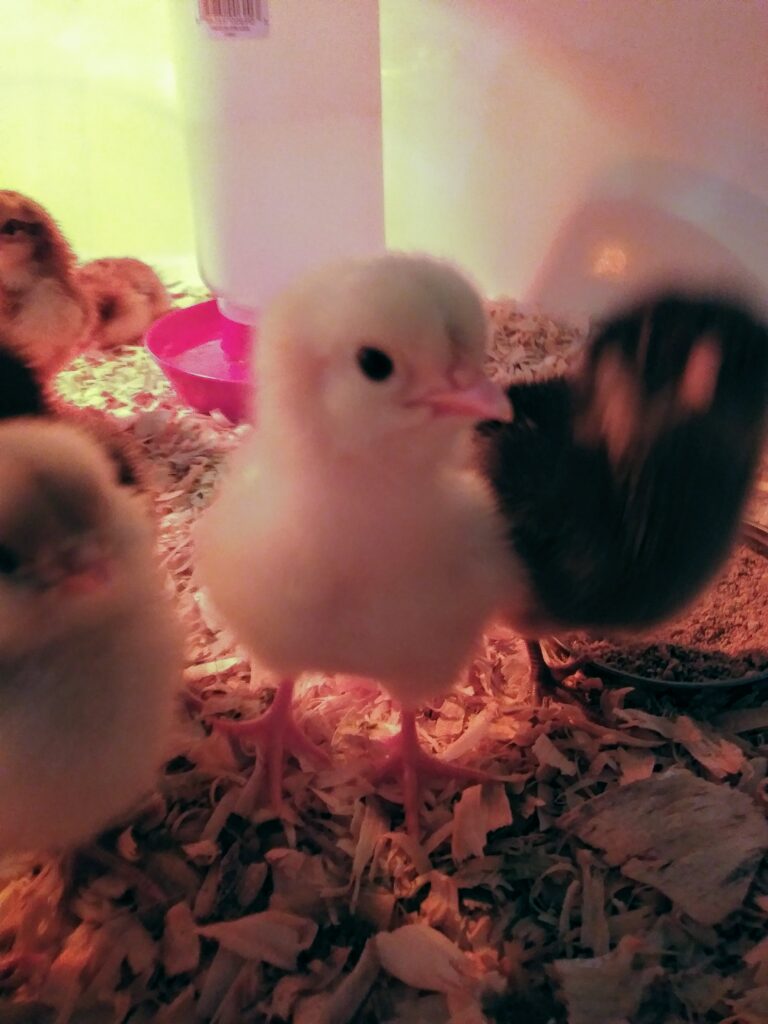 And I’m going to be spamming all my feeds with unsolicited chick pics from here on out, so be warned.

Thankfully, they only had to travel from Missouri, and the weather stayed nice and mild for their trip, and they all arrived safe and sound. We’ve got three Speckled Sussex and six each of Buff Orpingtons and Easter Eggers (aka Americaunas — they lay blue and green eggs). We actually ordered five of each, but they were short on Sussex and substituted one each of the other breeds, which is fine.

We also ordered all hens, but I’m hoping a rooster made it into the mix. With fifteen birds, we figured there was a good chance that might happen, so we didn’t order a roo. But I’ve read that it can be hard to get an established flock to accept a new rooster, and we would really like to breed them and have a sustainable flock, so I’m a little apprehensive about that decision, and crossing my fingers that at least one of our new babies is a boy.

For now we’ve set up a brooder for them in our master bathtub, one of those extra-wide and deep garden tubs that come standard in double-wides that we never use. It’s working great. When they outgrow that we’ll move them out to a transitional brooder in the warehouse until they’re big enough for the coop–which we’ve now got a definite deadline to finish building.

Oh! I got so excited about the chicks that I forgot to mention that Mr. B. and I celebrated our 15th wedding anniversary this week. The chicks were something of an anniversary present for us both. I shared on my personal Instagram about what I’ve learned in all these years about keeping a marriage strong — you can read that here.

Moving on to writing news, I’ve found my groove again, and the last half of Revolution is chugging along. This week was the first week in I can’t even remember how long that I’ve written every day. I switched things up by going to pen and paper and also shifting things around so I can write first thing in the morning, and those two simple changes have made all the difference. This morning I brainstormed and plotted out the remaining scenes, which are four in number. The end is so very nigh, y’all!

I’d love to finish it next week, but even if I don’t, I’m on track to finish it this month. I would also love to release it in time for Halloween, and since I’ve been editing as I go, I think that might actually be a realistic goal. I’ve already got the cover ready so all I’ll have to do is format it, which is mostly a matter of pasting it into a template, and then proofread, and then it’s done! Yay!

Speaking of figuring out what works for me, this week I discovered The Quitcast by Becca Syme. Well, “discovered” isn’t really the right word, because Becca’s been on my radar for over a year now. But I finally got around to checking out her podcast, and now I’m kicking myself for not doing so a year ago. She’s a writing and self-publishing coach who centers everything around the Clifton Strengthsfinder, which is less of a personality test and more of a strength and aptitude test that’s based on actual science, and can tell you a lot about how your brain is wired.

I’ve taken the test before, some time ago when it was free, which is no longer the case. Out of curiosity, I took this free knockoff earlier this week, and my top five matched my Strengthsfinder results, which are Strategy, Empathy, Ideation, Intellection and Belief (Communication, Relator, Futuristic, Context and Consistency round out my top 10). Becca helps put all that information into the context of what it means for you as a writer, how you function, why writing advice does or doesn’t work for you, how to figure out what actually does work for the way you’re wired, etc.

While I’m sure her coaching delves a lot deeper into figuring these things out on an individual basis, her podcast has been giving me a lot of insights into my own writing habits, successes and failings. And while it hasn’t exactly taught me anything about myself I wasn’t already aware of, it has helped me come to terms with and accept that there are things about the way I operate as a writer that are never going to change. I’m never going to be the kind of writer that churns out several novels a year, and I’m only going to burn myself out if I try to work at that pace. I need LOTS of time and space to think and process, and I need a lot of time between big projects to recover my energy.

It’s also helped me understand that, as someone who has a high degree of empathy and is also future-focused and doesn’t cope well with uncertainty, these crazy times we’re living in are extremely draining for me. I’m spending tons of energy just coping with the way the world is right now, and that’s why I’ve been so ridiculously tired lately and why it’s been such a struggle to find the mental energy and the will to write. So that’s helpful. I think that’s why moving my writing to first thing in the morning, before I get on social media or get exposed to any news, has made such a big difference. And I’m going to spend the weekend thinking about ways to protect my energy from all the insanity and stress without entirely sticking my head in the sand.

Another thing it’s helped me realize is that I’m prone to magical thinking about the future–thinking things like, “Okay, that didn’t work, but next time will be different”–and that I need to learn from the past and adapt my behavior accordingly. For starters, I’m going to accept the fact that I never get any novel writing done from about mid-November until January 2nd. And instead of making plans to start a new novel during that time and then beating myself up over neglecting it, this year I’m going to be intentional about taking a break from writing during those weeks, and instead focus on other tasks that I’m more likely to actually do. For one thing, I’ll focus on ways I can repackage my Dominion trilogy, since it will be done by then — like finally getting the paperbacks done and putting together an electronic boxed set. And I’m thinking that would also be a good chance to finally migrate my mailing list from Mailchimp to MailerLite and create a new series of autoresponders. I’ll probably take part in some giveaways, too. And already, just thinking about not having to worry about writing during the holidays and getting to focus on these things I’ve been putting off for so long is getting me jazzed about the season.

That might be too much of a look at how the sausage is made for your taste. But even so, I highly, highly recommend checking out Becca’s work and her YouTube channel. She’s got a series of books for writers, too that are going on my wishlist (that’s an affiliate link, btw — if you use that link to make an Amazon purchase I’ll receive a small commission at no cost to you, which I have to tell you because the FTC is extremely concerned that you don’t know how affiliate links work).

Before I sign off, I want to say one thing regarding current events. I think everyone who leans toward being apolitical or moderate or who prefers to stay out of the political debate has a threshold where they feel compelled to get off the fence and choose a side. While I haven’t exactly been moderate for a long time, I did generally avoid voicing my political opinions online for far too long. My threshold was crossed last year, and I found my voice and my courage to start using it to speak out against evil and stand up for righteousness and liberty.

I don’t know where your threshold is, friend. But if the recent actions of the current administration haven’t been enough to push you past your limit and compel you to choose a side, then I don’t know what it will take, and by the time you reach your limit, at this point, it might well be too late for it to make a difference. I’m not saying everybody’s got to start going to rallies or become keyboard activists. But if you haven’t already, now is a real good time to look around at what’s happening, at who is doing what, and make up your mind about where you stand, and what you stand for. Because in the immortal words of somebody famous and probably dead, “If you stand for nothing, you’ll fall for anything.”

And that’s all I’ll say about that in this space, although I’ve got plenty more to say in my personal Instagram stories if you’re interested.

And now, I’m going to sign off and start my weekend. I’m going to take a break from writing and let these last four scenes percolate in my head while I spend time with our new baby chicks and watch a scary movie or two.

Have you taken the Strengthsfinder (or something like it)? If so, what are your Top 5?

Oh, and PS – I’m still working on that conspiracy theory post, which is seeming more relevant by the day. Watch for that sometime next week!