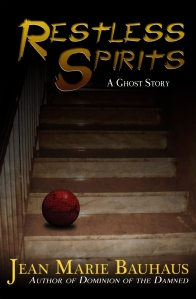 Ghost hunter Veronica “Ron” Wilson gets killed in the line of duty; but after she herself becomes a ghost, trapped in the house where she died, she realizes that the mystery has just begun. She and several other ghosts are being held prisoner in the house by the same sadistic spirit that killed them. Their captor likes to entertain itself by torturing its fellow ghosts, and as if that isn’t bad enough, it appears to have the ability to kill ghosts, devouring the poor souls for whom it no longer has any use. Ron’s only hope is to convince the other terrified ghosts to rally together to find a way to defeat the evil spirit so they can move on to their final rest. But Ron’s not in any hurry to get there once she discovers that there’s still a lot of living to do after death.

“If you like ghost stories and/or paranormal romance, you will love this book; it brings the two together brilliantly. …Overall this was a very enjoyable read that I found hard to put down, and I will definitely be reading more from this author.” — 4/5, The Masquerade Crew

Other Ways to Buy