One of our favorite things to watch this time of year is the “Hilloween” episode of King of the Hill. In this episode, traditional Halloween-related activities come under assault from hyper-conservative religious (and litigious) types who assert that Halloween is a satanic holiday. Soon, satanic panic pervades the whole town and Halloween is called off and trick-or-treating is banned. Children are instead sent to the “Hallelujah House,” where they’re allowed to wear costumes as long as they’re “Christian” in nature and are subjected to a spook house display of real-life “horrors” like teen pregnancy before being thoroughly evangelized.

Refusing to bow down to the hysteria, Hank Hill and friends protest by marching through town in their Halloween costumes, violating the trick-or-treat ban and the citywide curfew and in the process reminding everybody what Halloween’s really all about in our culture: candy and good, clean, innocent fun. Pretty soon, the whole town is marching with them, and they march right up to the Hallelujah House to collect their children and give them a proper Halloween.

Before I go any further, I want to point out that one of the things I appreciate about this episode is that it’s not presented as “those crazy Christians” vs. more level-headed non-believers. Anyone who watched this show with any regularity would know that Hank Hill and company are church-going Methodists with a love of God, Country and Texas. So it’s more like ONE overzealous Christian against a whole town of Christians who are usually more level-headed but nevertheless get caught up in the hysteria.

Anyone born after, say, 1985 might watch this episode and find it funny because it seems so absurd and over the top. But to anyone who grew up in the Bible Belt and lived through the Satanic Panic of the 1980s, it’s funny because it’s true.

Halloween took a weird, dark turn during the ‘80s. When I was a little kid during most of the ‘70s and the very early ‘80s, Halloween was one of the best times of the year. My neighborhood at the time was a true community, with a volunteer fire house that acted as a meeting place and a Ladies’ Auxiliary that organized neighborhood events. One of those events was an annual Halloween party at the firehouse. They set up a spook house for the older kids, and had costume contests and candy for the younger kids. Once it was over, everybody went trick-or-treating through the neighborhood. It was safe, and fun, and nobody gave a single thought to Satan.

Then one year my mom decided we weren’t putting up any Halloween decorations. Why? Because Satan. By this point, the county had installed a government-run fire department a few miles from our neighborhood, and the volunteer firehouse had been shut down and the Ladies’ Auxiliary disbanded, so the yearly parties were already a thing of the past. But trick-or-treating was still a big deal, so thankfully our mom backed down from forbidding us to dress up or trick-or-treat. She was one of the only mom’s who did, though. I had a hard time finding friends to go out with me on Halloween night that year because they were all being taken to “Hallelujah parties” at their churches.

This went on for a number of years. My mom continued to forbid us to put out Halloween decorations, although she still let us dress up and have our fun. I sat through a lot of sermons and lectures from youth group pastors about the evil origins of Halloween. At some point, nights out trick-or-treating started to end with a trip to the emergency room to get our candy x-rayed to make sure it didn’t contain needles or razor blades. Giving out baked goods or anything unwrapped or homemade became verboten because they might be laced with poison. We made sure to keep our black lab put up because Satanists apparently loved to sacrifice animals with black fur. Walking around the neighborhood to trick-or-treat became deemed unsafe because we were all targets for satanic kidnappers, so we started seeing station-wagons and minivans full of kids being shuttled from house to house. 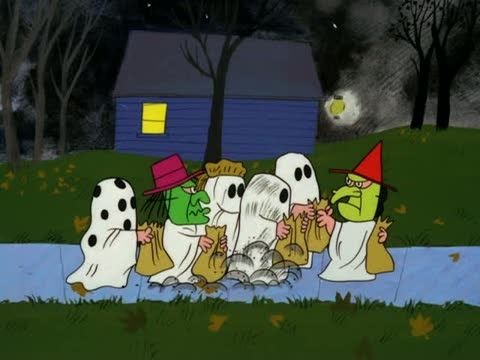 … was supposed to be a gateway to this. Image via Wikimedia Commons.

Through it all, I remained stubborn like Hank Hill. I refused to stop trick-or-treating or dressing up. For me, Halloween was about dress-up and make-believe and fun, safe scares and getting a sugar high. I failed to see how any of that glorified Satan. I still do.

I’m happy to see that, for the most part, all of the fear around Halloween has abated, and the holiday is a lot more like what it was when I was a kid. I still hear grumblings from time to time about Satan and Druids and pagan origins — but I also hear that stuff about modern Christmas and Easter traditions — and one local mega-church has a big-budget version of Junie Harper’s Hallelujah House that draws a big crowd every year.

But overall, it seems like everyone’s relaxed, and Halloween is more popular than ever. I drive around town and see churches advertising pumpkin patches and trunk-or-treat events. Walking through my neighborhood, I see plenty of houses and yards that have been spookified for the occasion. Even my mom has her grandkids and great-grandkids out for hot dogs and trick-or-treating every year.

Matt and I have our own Halloween traditions, which involve carving pumpkins, munching on popcorn and candy and watching John Carpenter movies in between handing out candy to trick-or-treaters. And you can bet our house is covered in Halloween decorations (although we still need to do something with the front porch).

What about you guys? Is Halloween one of your favorite holidays, or do you have reservations about it? Are you old enough to remember the Satanic Panic, and did it ruin your Halloweens, too? Let’s hear about it in the comments.

And if you haven’t seen it, try to spare 25 minutes or so to watch “Hilloween.” You’ll be glad you did.

Book sale aftermath and killing a significant number of darlings for the greater good.