I’ve been watching a lot of Ghost Adventures-type shows lately, partly for novel research and inspiration, but also because I just get a hankering for that sort of thing around this time of year. But I always have to stop watching them at some point because they tend to give me nightmares. I don’t really mind bad dreams that much; they often turn out to be great story fodder. But my husband definitely seems to mind my tendency to scream and shout in my sleep when I’m dreaming that something is out to get me, so for his sake, I stop watching.

The fact that I write about ghosts and the paranormal inevitably means that from time to time I get asked what I actually believe about this stuff. Since it’s Halloween (Halloween being a month-long event at my house), it seems like a good time to answer that question on the record.

I grew up in a predominately Charismatic Christian household, where I was taught from a young age that there are no such things as ghosts, other than, of course, the Holy Ghost. Besides that, there are angels and demons. There can’t be such a thing as ghosts, because people go straight to Heaven or Hell when they die, therefore any spooky supernatural-type activity must be demonic. Period, end of discussion. When anything spooky happened — and there have been a number of spooky happenings throughout my life — we were to rebuke it in the name of Jesus and move on.

In my adulthood, I’ve become a lot more open-minded on the subject. As a Christ-follower, I still believe in the existence of angelic and demonic beings, but as I’ve delved deeper into studying scripture and nailing down my own beliefs and views on doctrine and theology, I’ve come to realize two things: one, that the Bible itself is not nearly so cut-and-dried on the subject of ghosts; and two, that the universe is a crazy, mysterious place and we humans are only beginning to approach the threshold of being able to know and comprehend what’s out there.

Let’s talk about the first thing for a minute. Off the top of my head, I can think of only two instances where the Bible specifically talks about ghosts. The first is in the book of 1 Samuel when King Saul has the witch of Endor raise Samuel’s ghost. The witch herself is surprised and scared when she succeeds in raising the actual ghost of Samuel, who proceeds to prophesy King Saul’s doom. The witch’s reaction seems to suggest that she’s either a total fake or she’s more used to talking to demons than actual human spirits; then again, it’s possible that she simply didn’t expect to be able to raise God’s premiere prophet, and knew when God allowed it to happen that it wasn’t her own doing. The arguments to be drawn from this story could cut both ways.

The other instance is in the book of Matthew, when Jesus performs the miracle of walking on water. After a long day of preaching and teaching, Jesus wanted some quiet time to rest and pray, so he sent his disciples ahead of him to the other side of the Sea of Galilee. Once Jesus was ready, he simply walked across the surface of the lake to catch up with them. When the disciples saw him out there at a distance, floating above the water, Matthew 14:25 tells us that they began to freak out because they thought they were seeing a ghost.

Now, by this point the disciples — the would-be Apostles — had been with Jesus for a while. They had witnessed Jesus casting demons out of people, and had performed exorcisms in their own right. They had been given authority over demons and were not afraid of them. So if ghosts were nothing but demons, wouldn’t they know this? And if not, wouldn’t Jesus have used that as a teaching moment to explain to them that ghosts are really demons, if that were the case?

I won’t even get into how vague the Bible actually is about what happens to the consciousness between physically dying and each of the specific resurrections mentioned in the Book of Revelation, except to say this: when the Apostle Paul says in 2 Corinthians 5:8 that to be absent from the body is to be present with the Lord, he’s clearly talking about believers. But what about unbelievers? What about all that talk about Sheol and the grave in the OT? What about all that talk about sleepers and “sleeping” in the NT? What about “the dead in Christ shall rise first” on the day of the Rapture?

Now for the second thing. The other night, Matt and I watched a NOVA special on YouTube, The Fabric of the Cosmos, about discoveries that have been made about space and time and the very fabric of the universe. It ended with the revelation that apparently, as far as science can tell, what we perceive as reality is in fact one giant holographic projection. Kind of mind-blowing, right? 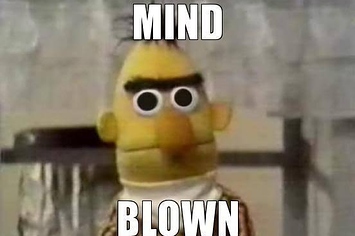 The special also revealed that, as far as quantum physics is concerned, the past, present and future all occur simultaneously. It’s only our perception that orders events in a linear fashion.

That seems to open up a whole other realm of possible explanations for what we perceive as ghosts and paranormal phenomena. Prior to this special, I was already fond of a theory I’d heard several years ago, that apparitions and disembodied voices are really natural recordings picked up by electromagnetic frequencies in the air that get replayed when conditions are right. Sounds pretty fringe-sciency, but it makes as much sense as anything else, and it makes even more sense in light of the reality-is-a-hologram revelation. Add to that the apparent possibility that ghosts are really just glimpses through space-time.

All of this brings us to the tl;dr answer, which is, I don’t know. I think there’s not enough information and too many different possibilities to draw a conclusion. Do I believe in paranormal activity? Absolutely, without a doubt. Am I prepared to draw any dogmatic conclusions about what’s behind them? Absolutely not. However, I do suspect that what’s known as intelligent hauntings probably are mostly demonic in nature, and are therefore something I want to steer clear of messing around with.

What about you? What’s your take on ghosts and hauntings? If you don’t believe in the paranormal, then how do you explain the apparently unexplainable? Share your thoughts in the comments.

And if you’ve got an hour to kill, here’s that NOVA special. It makes for some fascinating viewing.

ANNOUNCEMENT: Midnight Snacks is now available for pre-order on Amazon!

One thought on “Do you believe in ghosts?”